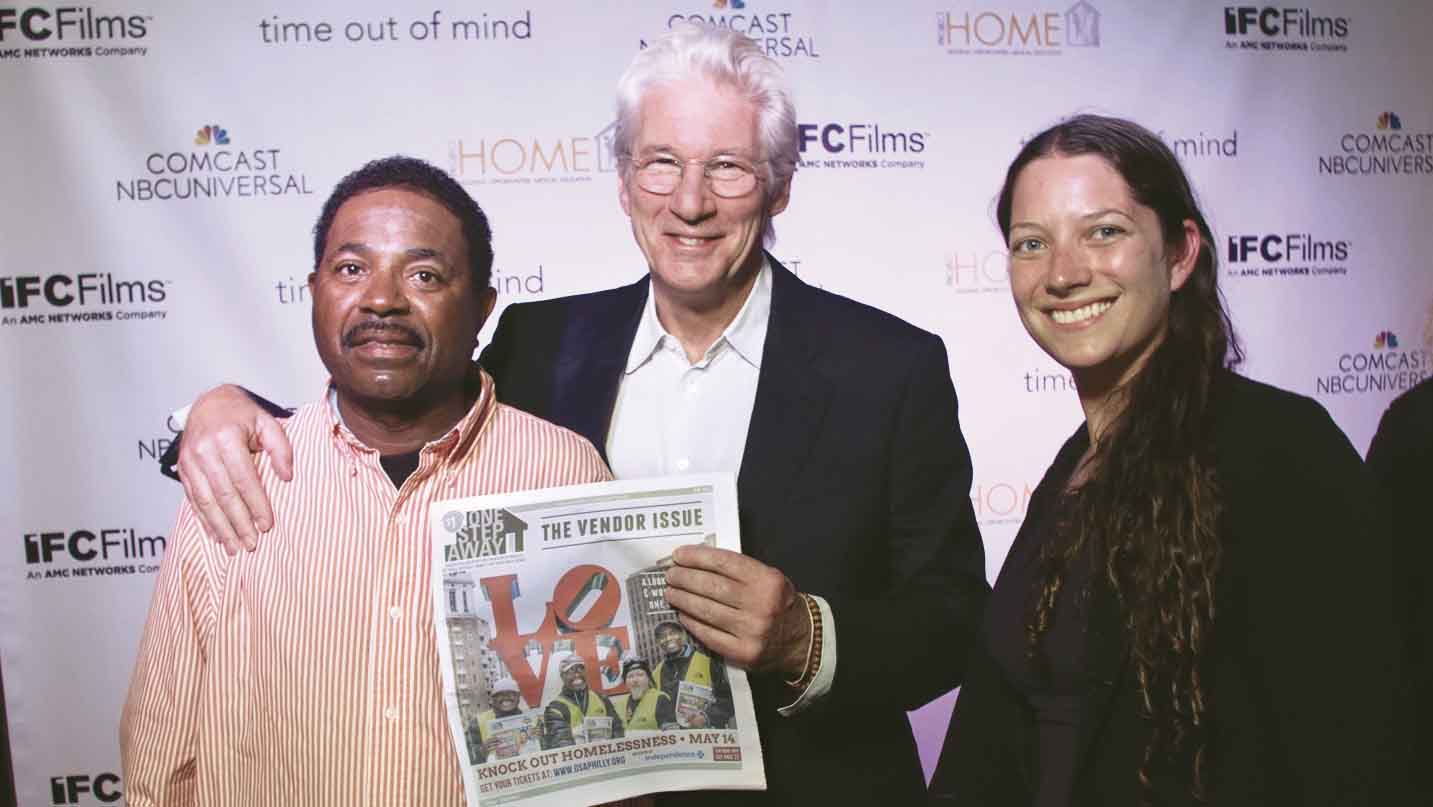 Jerry, a vendor with RHD’s One Step Away, was about to sit down to watch Richard Gere’s new movie when Gere walked up and asked about Jerry’s story first.

One Step Away was invited to a VIP screening of Time Out Of Mind, an indie film shot in three weeks on a shoestring budget in which Gere movingly plays George, a man experiencing homelessness and grappling with his existence in a world that has seemingly discarded him. It’s a project close to Gere’s heart; the iconic actor famous for movies such as Pretty Woman, An Officer and A Gentleman and American Gigolo, is a passionate advocate for homeless causes.

It took Gere and director Oren Moverman almost 15 years to make this movie, and as he was making appearances to promote Time Out Of Mind Gere insisted that homelessness providers and most importantly people who’d actually experienced homelessness have a chance to see the film first. In Philadelphia, at an event hosted by Comcast and Project HOME, Gere premiered the film for an audience that included One Step Away – and Gere seemed most anxious to hear what Jerry thought.

Gere is a supporter of the street newspaper movement, and was excited to find that Philadelphia – where he was born, although his family left Philly shortly thereafter – had a street paper. Asked if he had any message for people who were working to break the cycle of homelessness in their own lives, Gere laughed and said: “I don’t give them advice; they give me advice.”

“I think these guys are the heroes, they’re the survivors,” Gere said. “Your vendors are out there, they have done something heroic. They’ve pulled themselves out of a very deep ditch and they didn’t do it by themselves.” Gere asked Jerry about his experience, and they talked about how Jerry broke the cycle of homelessness in his life (Jerry has been able to secure and maintain housing thanks in part to his employment as a vendor for One Step Away). Gere told Jerry: “So, Thank God. You’re heroic.” When Jerry said: “I try to encourage other guys who are out there on the street, because if I can do it they can do the same thing,” Gere excitedly punched the air and said: “Yes! Absolutely! That’s the most important thing, it’s the community isn’t it?”

“You can go to them and say: Look, I’ve been there, I know,” Gere said. “Thank God you had help around you and that you also had the energy to reach back and take that hand – because I know there are a lot of times when you don’t even have the energy to accept that help.

In its history, One Step Away has distributed more than 700,000 issues, serving as an important voice of advocacy on issues of poverty and homelessness. The newspaper has won North American Street Newspaper Association and International Street Newspaper Association awards for journalism. More than 100 writers – both people experiencing homelessness, volunteers in the community, and other homelessness providers working in partnership with One Step Away, contribute to the newspaper each year.

Perhaps most importantly, One Step Away vendors are a visible presence on the streets. Homelessness has in many ways become a national crisis people have learned to ignore and not see, and the visibility One Step Away brings to the issue has garnered praise from across the spectrum of homeless services. Gere himself reported that the most impactful part of his experience portraying a homeless man was the way he became invisible on the streets.

“I was invisible in New York,” Gere said. “Because I was this character, people decided within two blocks of seeing me that I was a homeless guy, and didn’t look any further. This guy you’re talking to right now is the same guy who was on the street then – and no one made any eye contact.”

“It was confusing, and profound,” he said. “As a filmmaker, I was very happy, because it meant we could make the movie. If everyone had recognized me, we would have had to shut down. We couldn’t make the movie; it would’ve been impossible.

“It was a deeply profound and existential moment of how completely surface our experience of each other is. We go primarily with what we see — but our senses lie to us continually because we’re living in an echo chamber of our own minds and prejudices. Now, if Richard Gere, who has money and fame and in this situation everyone thinks kindly about me, if I can stand on a street corner and be treated like garbage? That’s a profound lesson for me personally, but I think for an audience it should be as well.

“I try to verbalize it, and I don’t think I can get there. But it radically changed my view of myself and of the social fabric around me.”

A previous winner of Philadelphia Marian Anderson Award, Gere established the Initiatives Foundation in 2002 to raise funds and funnel resources to disadvantaged communities worldwide. Gere has received the Media Spotlight Award for Leadership from Amnesty International, the prestigious Eleanor Roosevelt Humanitarian Award, and he’s worked for years with the Coalition for the Homeless in New York. Time Out of Mind is a passion project for him, and it shows.

“I find myself saying this all the time — our deepest yearning is to be in touch with that thing that is precious and magnificent inside of ourselves,” Gere said. “But we’re social beings; to be in a community of people who, when they look at us, we know they think we are precious, is deeply important to all of us.

“We are all of us, deeply, in this together. And I would hope that is what it feels like.”

One Step Away vendors Jerry and Jeff were able to see the movie and they reported in the newspaper’s October issue that the film rang very true.

“That’s what it’s really like to be homeless; people turn their backs on you,” Jerry said. “It reminds me what I went through, that’s how it is.”

“I was struck immediately by the realism of Time Out Of Mind; it is blindingly accurate about the conditions and troubles and the delusional behavior that accompanies homelessness,” Jeff said. “When I saw this, I didn’t expect to see it quite the way I did. My end feeling is one of gratefulness, not only to One Step Away, but that now I want to get up in the morning, I want to do my job, I want to thank whatever powers that be that I have a set of keys in my hand, and I don’t have to worry about being evicted or any of this stuff, not anymore – and I want to make sure it stays that way.”